Congratulations to Frances McDormand for winning the Oscar for best actress for Three Billboards Outside Ebbing, Missouri! What a powerful and wisely succinct acceptance speech! It was fantastic to see a 60-ish women be awarded for her achievements!
McDormand is an actress I have followed for years, and even though her role was small, I loved her character Zoe, Erica’s (played by Diane Keaton) articulate and feisty sibling in Something’s Gotta Give. One of my favorite scenes was the conversation at the dinner table where Zoe breaks down the societal stereotypes of unmarried older men and unmarried older woman.
While I won’t disagree that the over-50 man is held up as an icon of masculinity, the over-50 woman who embraces her age and exudes intelligence, confidence and boldness in her interests, passions and accomplishments, and is having the time of her life is equally iconic! She enjoys and applauds her singleness, doesn’t use her strength to separate herself from others, but instead uses it to gather others for a common cause. She is open to a relationship, looks forward to the day that special someone walks into her life, and doesn’t miss the cues of interest.
Cindy Joseph, founder of the skin care and cosmetics line called BOOM! by Cindy Joseph, and who said “I Do!” after 60, shared the following perspective in an issue of Zest Now: “What is attractive really has to do with how happy you are,” she says. “It’s not the size of your derriere, the shape of your nose, the color of the outfit you have on. If you’re going through life with happiness and joy when you’re single, then you can do it with a partner.”
Read more about Cindy Joseph!
Also check out more from Zest Now, an online magazine for women 50 and forward.
Do you know a women over 50 who causes people to do a double-take when she walks by; who inspires the young and old to blaze new trails? One who talks about her age, and is not afraid to wear her hair long, short or silver, and has the audacity to start something new? One who others are so in awe of, that they just can’t mask their attraction? Maybe it’s you!

2 thoughts on “Audacious, Single and Over 50”

This site uses Akismet to reduce spam. Learn how your comment data is processed.

On the Subject of Me 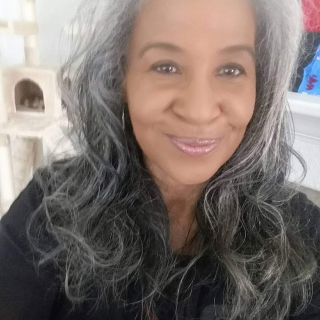 A 60~ish silver-tressed bibliophile, with the audacity to seek and find fulfillment and vibrancy in my Third Act!

Some of the links used on this site are affiliate links, meaning, at no additional cost to you, I may earn a commission if you choose to make a purchase, which I will use towards buying a new book, or a great cup of coffee or tea! Thanks for joining me on this journey!

The day after my birthday, and I'm feeling good!
💥GREAT #tuffshed Promo on NOW! Take advantage of the $avings!💥
Day 1 of #NaNoWriMo
Spotted this Flower Child while enjoying my #chaitealatte✌️
A space for your #bookclub #craftroom #craftstorage
That 🌧atmospheric river 🌧messed some stuff up! Solution!